In the center of Lviv, on Svobody Avenue, the action “Angels of Light” was held, dedicated to the Day of Remembrance of the children who died as a result of Russia’s armed aggression against Ukraine.

“Today we bow our heads before our bright angels, our children. It happened that, hiding from the shelling, we spent a long time in the basements and waited for help. Thank God and all caring people, now we are safe,” said Irina, a teacher of children from the Luhansk region. 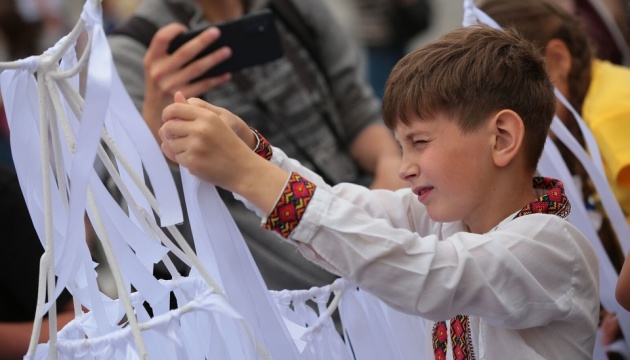 An action “Angels of Light” was held in Lviv in memory of children who died during the war / Photo: Lviv OVA

Dozens of children from orphanages from Donetsk, Lugansk and Kharkiv regions, who were evacuated to the Lviv region, took part in the action. Together with their teachers, they now live in one of the shelters in Lvov.

“First of all, what I thought about at the beginning of the war: I need to save my child, no matter what. After all, if we don’t save the color of our nation today, we won’t be able to live on,” shared her impressions Irina, who, together with her daughter, was evacuated from Irpin.

“Angels of Light” is an installation of an angel, on which during the event children knitted white ribbons as a symbol of the souls of little Ukrainians who died at the hands of the invader. The statue of the angel was made by children from the Stryi Higher Vocational Art School.

At the end of the event, the performance of the brass choir of the Academic Symphony Orchestra of the Luhansk Regional Philharmonic took place.

As Ukrinform reported, during the full-scale war that Russia started, 261 children have already died.

The defenders of Ukraine put up stubborn resistance to the aggressor and inflict heavy losses on him.

Annexation in action: a Russian bank began to operate on the territory of the “DPR”

Annexation in action: a Russian bank began to operate on the territory of the “DPR”

Another lawyer arrested in Crimea

More than 14,000 bulletproof vests and 18,000 helmets were delivered to the Armed Forces of Ukraine in a week