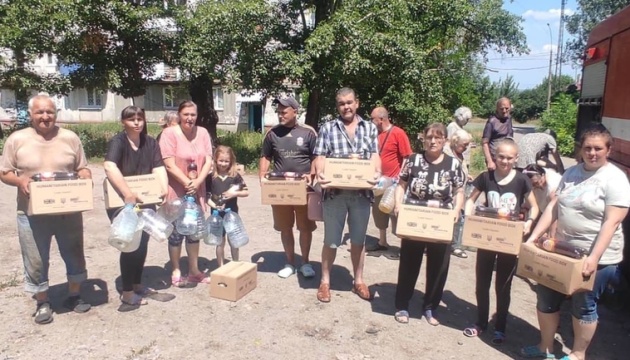 Rescuers of the State Service of Ukraine for Emergency Situations of the Luhansk region over the past day, June 22, delivered 500 kg of food and 48 tons of water to the residents of Lisichansk.

About this in Facebook The Main Directorate of the State Emergency Service in the Luhansk region reported, Ukrinform reports.

“Emergency workers continue to help the population survive in the conditions of war. In Lisichansk, rescuers brought 48 tons of technical water to the townspeople, delivered and unloaded 500 kg of food, 0.1 tons of drinking water. And also, three people were evacuated to a safe place, ”the message says.

In addition, over the past day, on June 22, the rescuers of the Lugansk garrison helped their brothers-in-arms in the Kharkiv region: they put out fires in residential buildings and garages after enemy shelling, removed the bodies of two people from under the rubble.

The fighters were also involved in the liquidation of emergency situations in the Pavlograd district of the Dnepropetrovsk region, where they fought a fire in an open area.

As Ukrinform reported, Russian troops are constantly shelling the Luhansk region with all types of weapons, destroying residential buildings, infrastructure, and killing civilians. Hundreds of people in Lisichansk are forced to hide in basements and cellars, often without a livelihood.

Weapon of victory: Ukrainian defenders talk about the use of Javelin