Sumy region was hit almost a hundred times in a day, the enemy is destroying the captured villages – the situation in the regions 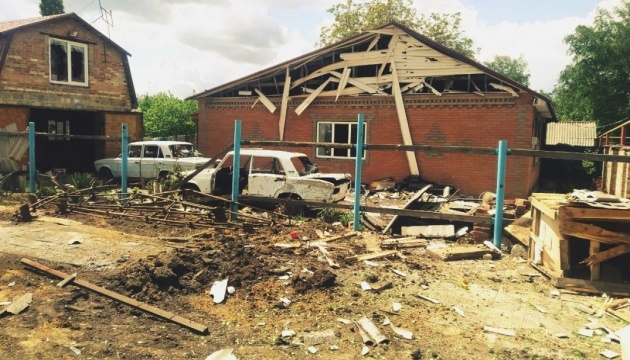 In the Sumy region over the past day, almost a hundred strikes from Russia have been recorded, in the Kherson region, Russian invaders are destroying temporarily captured villages.

According to Ukrinform, this is stated in the summary information of the military-civilian administrations on the situation in the regions of Ukraine as of 8:00 on June 23.

In the Sumy region, the Russians fired on four districts from different types of weapons. Recorded about a hundred artillery strikes from the Russian Federation. One man was killed when munitions were dropped from an enemy drone.

As a result of the shelling, the infrastructure of the villages of the Sumy and Konotop districts was damaged, including residential buildings, the Ata psycho-neurological boarding school, a water tower, electrical networks, a farm, and animals were injured.

Read also: In Sumy region, a police car was blown up by a mine, there are dead and wounded

Late last night, while on patrol, policemen were blown up by a mine, five were injured, one person died.

In the Dnipropetrovsk region, the Russian invaders again fired on the Krivoy Rog region. In Apostolovo, two people were injured. The city is partially without electricity and water. Streets and yards are sown with cluster munitions. People were taken to safe places and now pyrotechnicians of the State Emergency Service are working there.

Airstrikes and missile attacks on Severodonetsk and Gorsky continue in the Luhansk region. Loskutovka and Ray-Aleksandrovka are captured by the enemy. In Severodonetsk and Sirotino, Zolote and Volcheyarovka, Russian attacks were repelled.

See also: Invaders fired on the Pechenegs in the Kharkiv region, seven wounded

The invaders are destroying industry in Severodonetsk. The fire hit the territory of a brick factory, “Fiberglass”, as well as a factory of chemical non-standardized equipment. The building of the second checkpoint of “Azot” was damaged. One person died, three were injured.

In the Donetsk region at night, the Russians fired artillery and mortars at the positions of the Armed Forces of Ukraine and settlements. At least two shellings of Maryinka were recorded, one – Krasnogorovka, five – the village of Novomikhailovka.

During the day, shelling was carried out from small arms, tanks, artillery, mortars, rocket systems “Smerch”, “Grad”. Shot at Toretsk, Slavyansk, Bakhmut, the village of Ocheretino, the villages of Ilyinovka, Berestok, Georgievka. The area is without gas and partially without water and electricity. Three people were killed, two were injured.

In the Chernihiv region at night, the Russians fired mortars at units of border guards near the village of Gremyach. There are no losses.

In Kharkiv, at night, an enemy shell hit a warehouse in the Industrial District, a fire broke out, no one was injured. At about 5 o’clock in the morning in the Chuguevsky district of the Kharkov region, the Russians got into one of the enterprises. Rescuers extinguished the fire, no one was injured.

Until now, the fire at the gas processing plant in the Izyum region, which arose as a result of shelling on June 18, continues.

Yesterday afternoon, the army of the Russian Federation launched seven Onyx-type missiles at Nikolayev. Multi-storey buildings were damaged, destruction of varying degrees in private houses, and a fire also broke out. As a result of the shelling, three people were injured.

In the Bashtansky district of the Nikolaev region, Russian troops fired at the village of Bereznegovatoe at night. Shelling continues in Bereznegovatskaya community. Shelling of villages along the demarcation line continues. Information about the victims and damage is being specified. Also at night, the Russians shelled the village of Novonikolaevka in the Pervomaiskaya community, damaging residential buildings and agricultural equipment.

See also: The number of injured children in Ukraine due to Russian aggression has increased to 593

As a result of the capture by the Russians, hundreds of villages in the Kherson region were practically destroyed, in particular in the Berislav region and on the border with other regions. Houses, schools, hospitals, kindergartens were damaged and destroyed, roads and bridges were mined, equipment was stolen.

In Mariupol, the invaders create a “junarmia”

In Nikolaev during air alarm explosions sounded – the mayor

At the insistence of Cyprus, Russians will not be banned from buying property in Europe