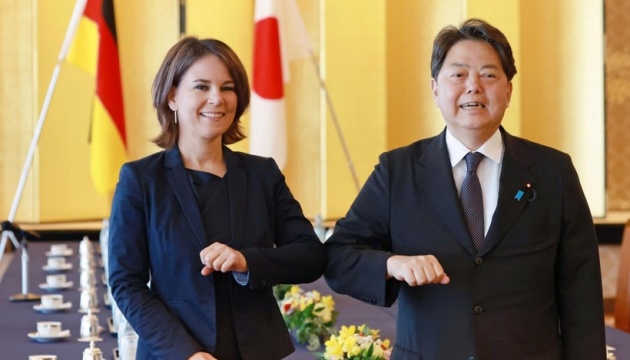 Against the backdrop of a Russian invasion of Ukraine, Germany and Japan will defend the rules-based world order and help organize grain exports from Ukraine.

According to Ukrinform, following the meeting between German and Japanese Foreign Ministers Annalena Burbock and Yoshimasa Hayashi, writes Kyodo news.

The foreign ministers of Japan and Germany have pledged to work together to support a rules-based international order threatened by the Russian invasion of Ukraine, while maintaining economic sanctions against Moscow.

See also: US to raise issues of Russian war in Ukraine at G20 meeting in Indonesia – State Department

According to Hayashi, Germany and Japan will also help organize grain exports from Ukraine. However, the minister did not specify what exactly both countries intend to do.

It is noted that the two ministers also agreed that “the two states should further strengthen defense cooperation in the Indo-Pacific region against the backdrop of increasing China’s maritime assertion.”

See also: Japan plans to increase defense spending due to the Russian war against Ukraine

“We must be united with like-minded states to deal with the Russian invasion of Ukraine, which is undermining the foundations of the international order,” Hayashi said.

As Ukrinform previously reported, Japanese Prime Minister Kishida Fumio announced additional sanctions against Russia, including a ban on the import of Russian gold and restrictions on 70 individuals.

In the Kharkiv direction, the Armed Forces of Ukraine severely suppressed an enemy assault attempt

Gaidai on the situation in Donbas: Humanitarian catastrophe will be 100% there

Gaidai on the situation in Donbas: Humanitarian catastrophe will be 100% there

President on children awarded on the occasion of Youth Day: Not every adult has it in his biography